Paving the way to Commercial Bay - The Tile People
Get inspired at our Parnell Showroom. Call 09 303 0143.

Paving the way to Commercial Bay

It’s been described as the most transformational development in Auckland’s recent history; the $1 billion Commercial Bay project by Precinct Properties.

A veritable cast of thousands has spent years taking the building from conception through to (mostly) completion including hundreds of local businesses who have brought their experience and expertise to bear. One of those businesses is The Tile People.

“Our involvement in the project began in 2017, when we were tasked with sourcing the natural stone products as set out in the design direction of the team led by Blair Johnston from Warren and Mahoney, in association with LandLAB, mana whenua and Tessa Harris (Ngai Tai Ki Tāmaki),” says Lindy Messam, of the Architectural Division at The Tile People. 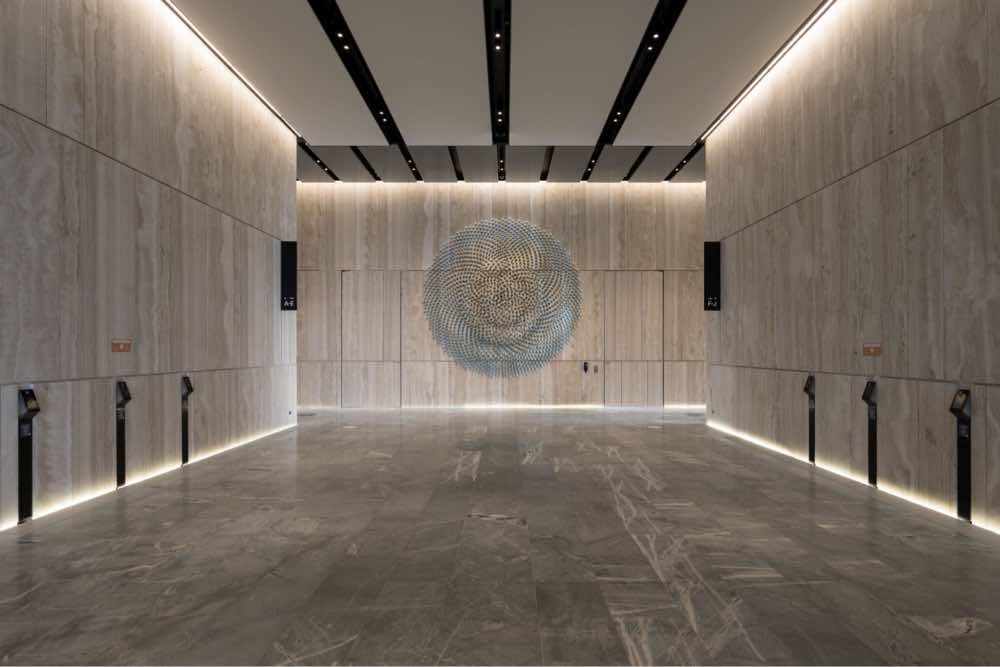 “Significant areas for completion included all of the common laneways and spaces within the retail precinct of commercial bay, as well as significant areas of internal cladding within the PwC tower. In total, we supplied 18,000m2 of natural stone and porcelain tiles—enough, essentially, to completely cover two decently sized rugby fields.”

With the design direction set out, Steve Ooi, Founder of The Tile People travelled to Italy with some of the principal stakeholders to select the granites and travertine that would end up gracing the retail precinct and PwC tower.

“That initial process, the selection and preparation of the stone, took place over the course of about 12 months, with the group saying that one of the highlights was standing hundreds of metres inside a mountain, hand selecting the travertine blocks that would end up being cut into slabs.

“Once the granite and travertine were processed, the next step was to have it cut to size as per the design specifications and a dry-run carried out of how it was to be laid out. Each piece was then individually numbered and the whole lot shipped to us in New Zealand—nine container loads.” 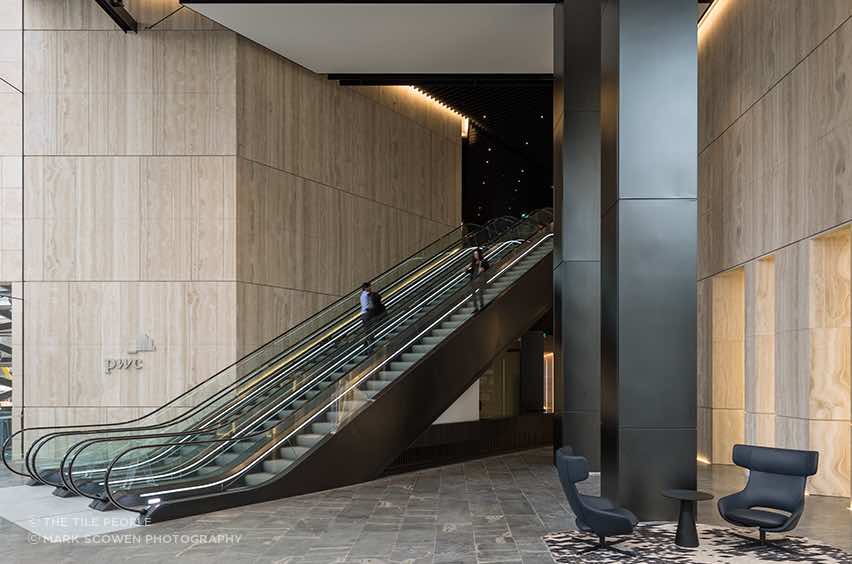 It’s at this point in the journey that the hard work truly began, the long and meticulous process of hand-installing all that stone.

“At times we had a team of up to 80 people working on the installation, working really hard to get it all done within the timeframe and to the level required, making sure the exacting design—all of those chevron shapes—was fully realised.

“It’s been a really exciting project for us filled with challenges but with an incredible result that we’re really, really proud of—a huge achievement by everyone and incredibly humbling to have been involved in on a collective level, to look back and be able to have our name against such an iconic, landmark project.”

“It’s really satisfying to see our beautiful, responsibly sourced materials come to life and equally pleasing to see how our contribution, even if in a small way, will enhance the shopping, working and dining experience of everyone who comes to Commercial Bay.” 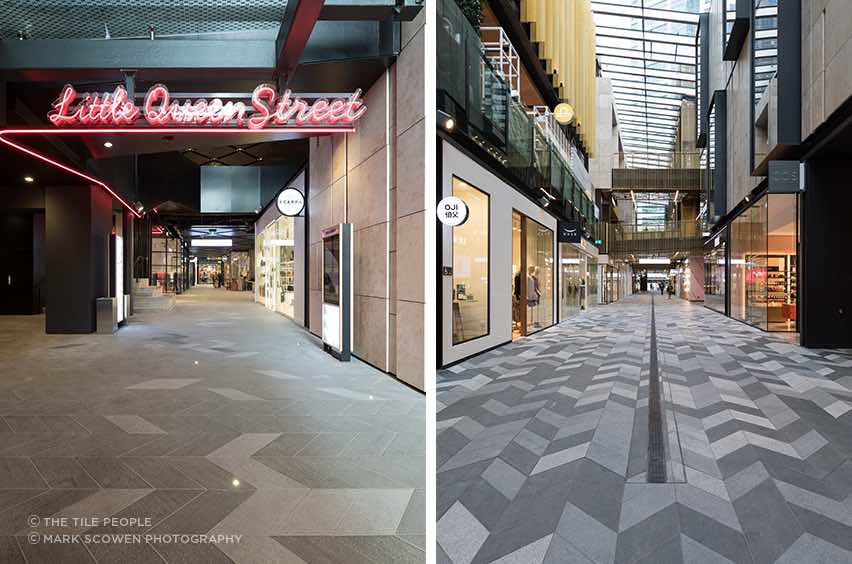 Throughout the retail precinct, a mix of three different coloured granites feature, says Lindy, with the result of creating a salt-and-pepper effect while in other areas just the one colour and finish has been used to provide texture and contrast.

“There is such a deeply rich woven element to the design, which references the concept of aramoana—pathway to the ocean—the idea of arrival and departure and journeying by sea, which I am sure will resonate with visitors on a subliminal level and which appears again and again throughout all the materials and architectural details in such a rewarding and beautiful way. You can really feel the community aspect that imbues the space, it’s accessible and diverse and nothing like the shopping mall experience we usually have.

“I find it such a privilege, after how much time I’ve spent in the space already helping get it to this point, to now see other people enjoying it and to get to enjoy it all over again on an entirely different level.

“Unlike so many other commercial projects I’ve worked on, where once it’s completed you never interact with it again, there is a palpable connection between myself and Commercial Bay; one I’m sure everyone of the hundreds of artisans, suppliers and tradespeople who made their own contributions, feels.” 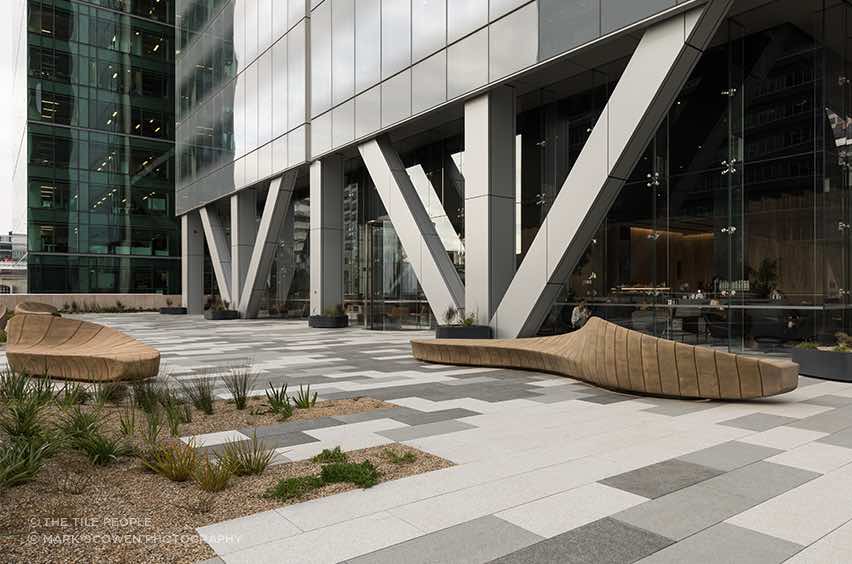 Enquiry about Paving the way to Commercial Bay